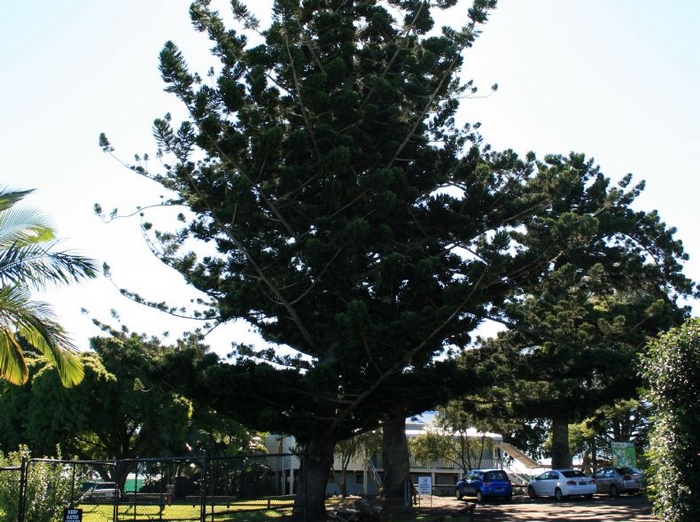 More than just providing shade on a sunny day, the two hoop pines that stand like sentinels at St Paul’s Anglican School in Bald Hills actually have an interesting story to tell.

The taller hoop pine is approximately 200 years old. Meanwhile, the smaller one which is possibly a seedling from the older tree and is said to be more than 150 years old.

That’s not the most surprising fact about these hoop pines. Interestingly, the two trees have survived despite the prevalence of logging and tree removal for agricultural properties since the 1820s. They’ve also been spared from the extraction of most of the hoop pines from the Moreton Bay region over the past 50 years.

The  pair of  heritage-listed Hoop Pines are significant to the history of the locality as rare examples and surviving evidence of the valuable stands of Hoop Pine which made the Moreton Bay district so attractive for early colonial settlement.

These trees also raise horticultural interest, being rare specimens of trees of this age surviving in the Brisbane area. Furthermore, the two hoop pines are particularly linked to the earliest development of the Bald Hills district.

Thomas Gray, a Brisbane bootmaker who had emigrated to New South Wales in 1841/1842 from Scotland, is partly responsible for attracting agricultural settlers to Bald Hills.

Gray was the one who convinced his fellow Scots, Stewart and Duncan families to leave the flood-stricken Hunter River district and move to Bald Hills in the mid-1850s.

John Stewart made a preliminary trip to the district c. 1855. He sought to select suitable land, not just for himself and the Duncans, but also for a large number of Hunter River settlers who were equally interested. Stewart applied to the New South Wales survey office to have the land surveyed. The land was not proclaimed available for sale until December 1856.

The Stewart family finally purchased land in February 1857. However, due to the delay in the survey, other interested Hunter River settlers moved to the Clarence River instead.

Only the Stewart and the Duncans families took up land at Bald Hills. They moved onto their selections in early October 1857. Because of this, they were recognised as the first non-indigenous settlers at Bald Hills.

The newcomers immediately developed their lands for agricultural purposes. John Stewart had early experimented with arrowroot and cotton, for which he won bronze and silver medals at the London International Exhibition of 1862.

Stewart and his family were well respected in the Bald Hills community. They were also active members of the local Presbyterian church, John serving as an Elder for nearly 40 years.

The Stewart home also held the earliest Presbyterian services in the Bald Hills district as well as many local events.

A photograph dated 1906 shows the residence with the two already mature hoop pines forming a natural frame to the front entrance. From this evidence, it is clear that the trees were not late 19th or early 20th century plantings. Moreover, it would have been unusual for them to have survived to the 20th century, were they not incorporated within the earlier Stewart house garden.